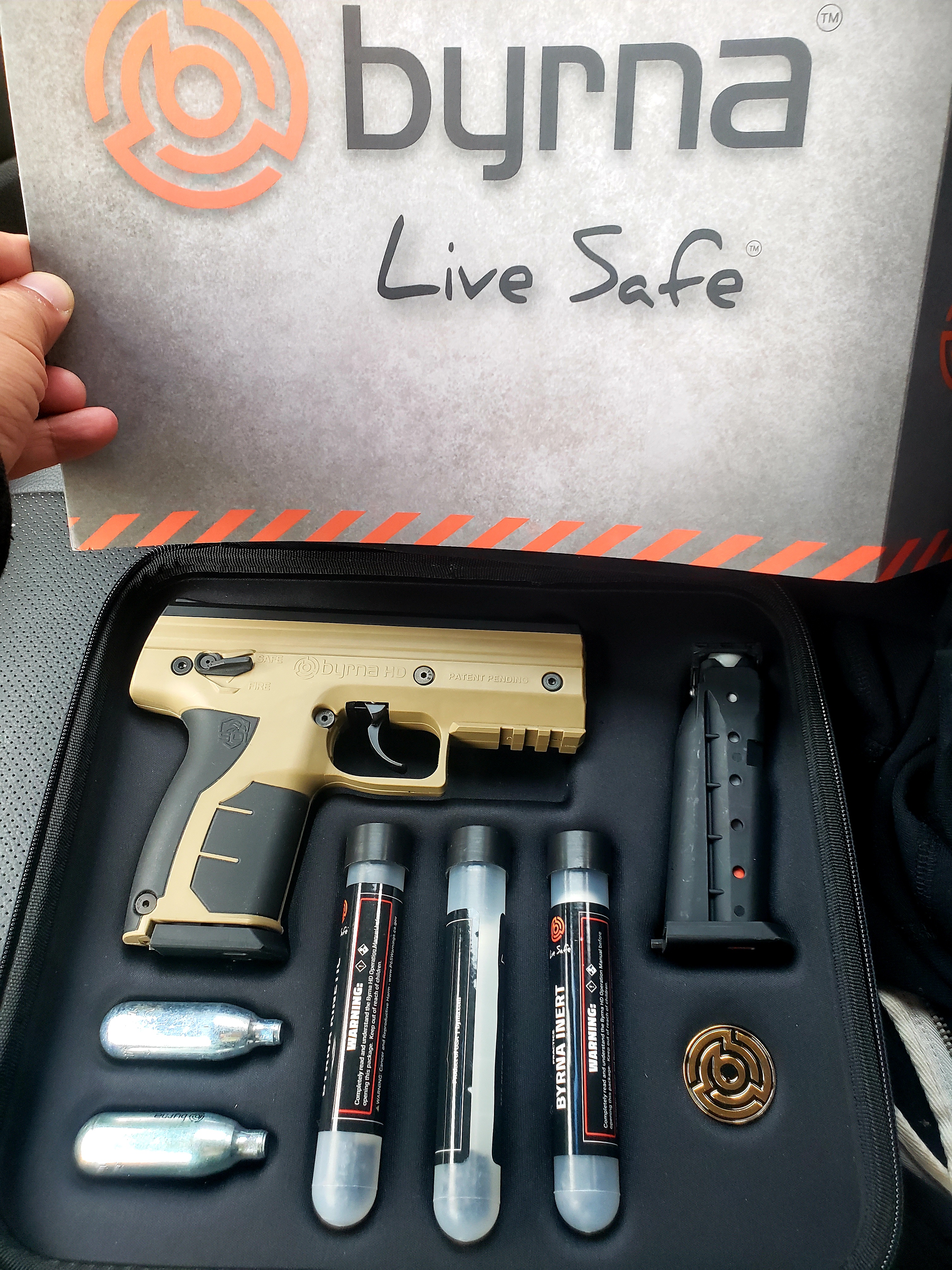 I have always been a fan of BB guns, airsoft, and paint ball guns. So when I leaned that companies were making CO2 powered .68 caliber pepper ball guns, I thought that was a brilliant idea. I mean, why wouldn’t it be? They are just high-powered BB guns that launch extra painful rounds that can be used to stun an attacker in a self-defense situation. On top of that, these things aren’t actually considered firearms, so they don’t require any type of permit, background check, or special license to carry one legally (in most states…check your local laws).

After watching a bazillion YouTube review videos on Byrna’s HD (home defense) launcher, I decided to reach out to the company and check one out for myself. The company agreed to send one my way with a nylon holster and enough rounds to fully test it. 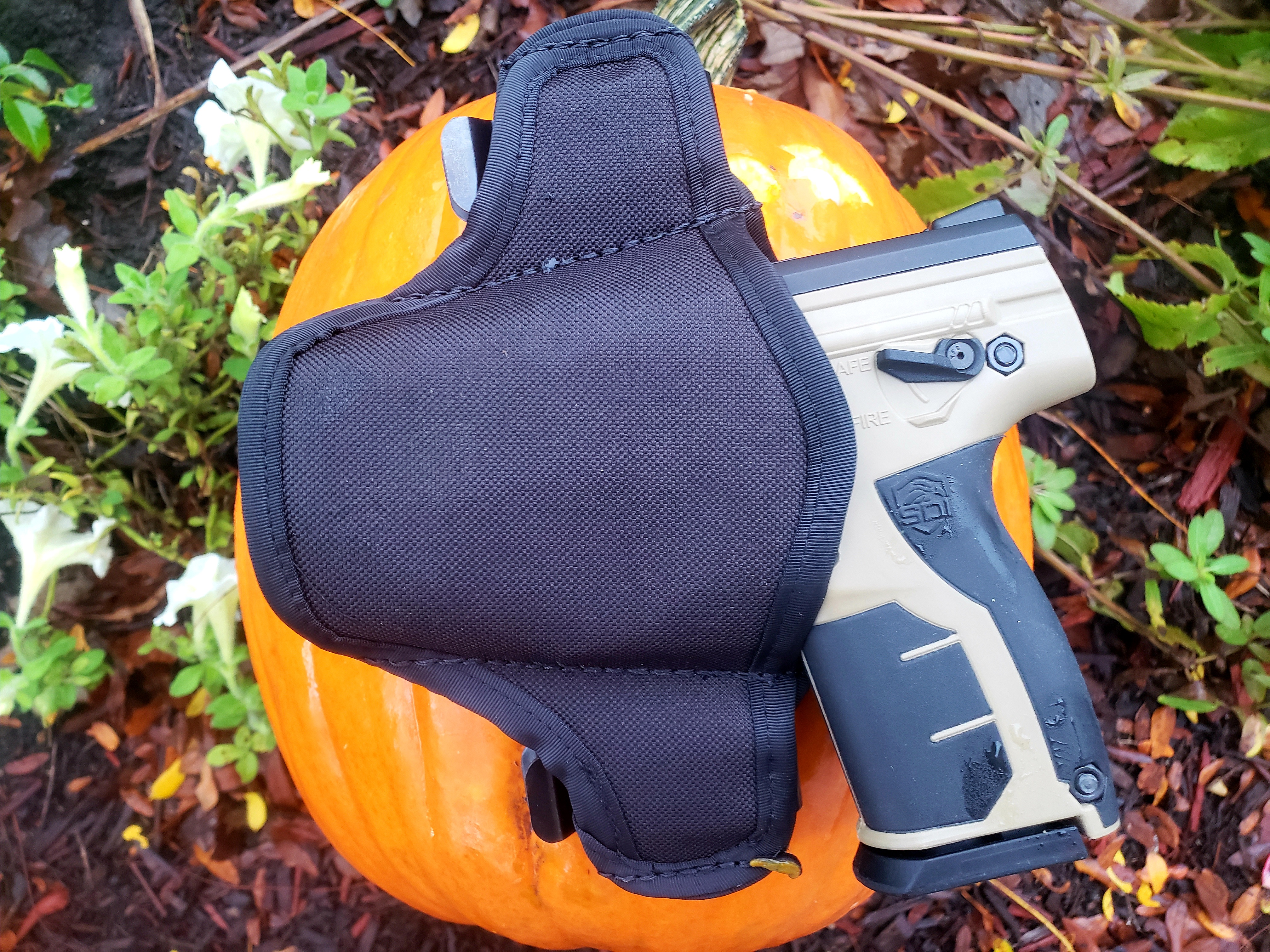 Within a couple of days, I received a care package from Byrna with a really nice-looking case, a coyote tan Byrna HD launcher, a nylon OWB holster, a box of spare CO2 cartridges and about 150 rounds of kinetic to pepper balls.

While I do like the look of the coyote tan, it resemble a real firearm too closely. That can be dangerous for obvious reasons.

The good thing is that the Byrna HD comes is a variety of colors like yellow and orange, you know, colors that won’t get you shot. Gray, black are also available along with the coyote tan (stick with the bright colors).

I AM THE PUMPKIN PUNISHER

After flipping through the manual, I decided to go to my local grocery store and buy a pumpkin to shoot up. I figured the density of the pumpkin’s shell would give me a good idea of how well or not so well the kinetic rounds would perform. Keep in mind, there are a lot of videos out there where guys are taking shots from the launcher and they all say that it sucks, especially with the pepper balls.

I decided to test the Byrna HD launcher early in the monrning and it’s a bit louder than I expected. My neighbors in the apartment building across the parking lot from me came out to see what was going on and stared at me from their balcony as I murdered an orange gourd. I thought for sure that they were going to call the cops, but they didn’t. 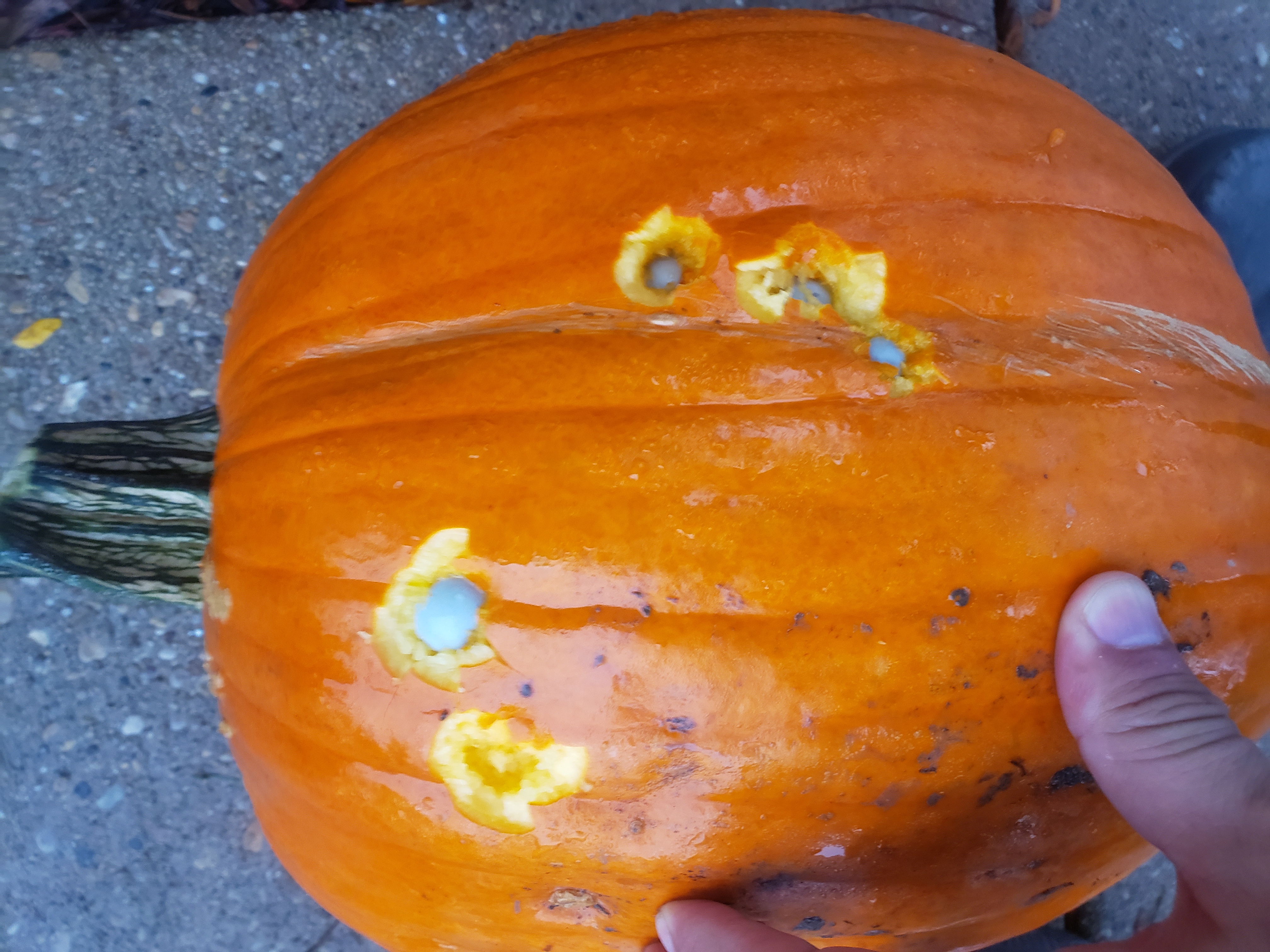 The Byrna has a fairly heavy and long trigger pull, which is no big deal. Shooting it is pretty straightforward. Fire once while it’s on safety to puncture the CO2 cylinder and charge the gun. Slide the safety down and you are good to go.

The Byrna proved to be very accurate as I shot it at about 10 yards and I produced a pretty tight grouping. Four out of five kinetic rounds penetrated and sunk into the pumpkin shell at about ¼” to ½” deep. The fifth round penetrated the shell, but bounced off, I’m not sure where that round went, but it wasn’t in the pumpkin. 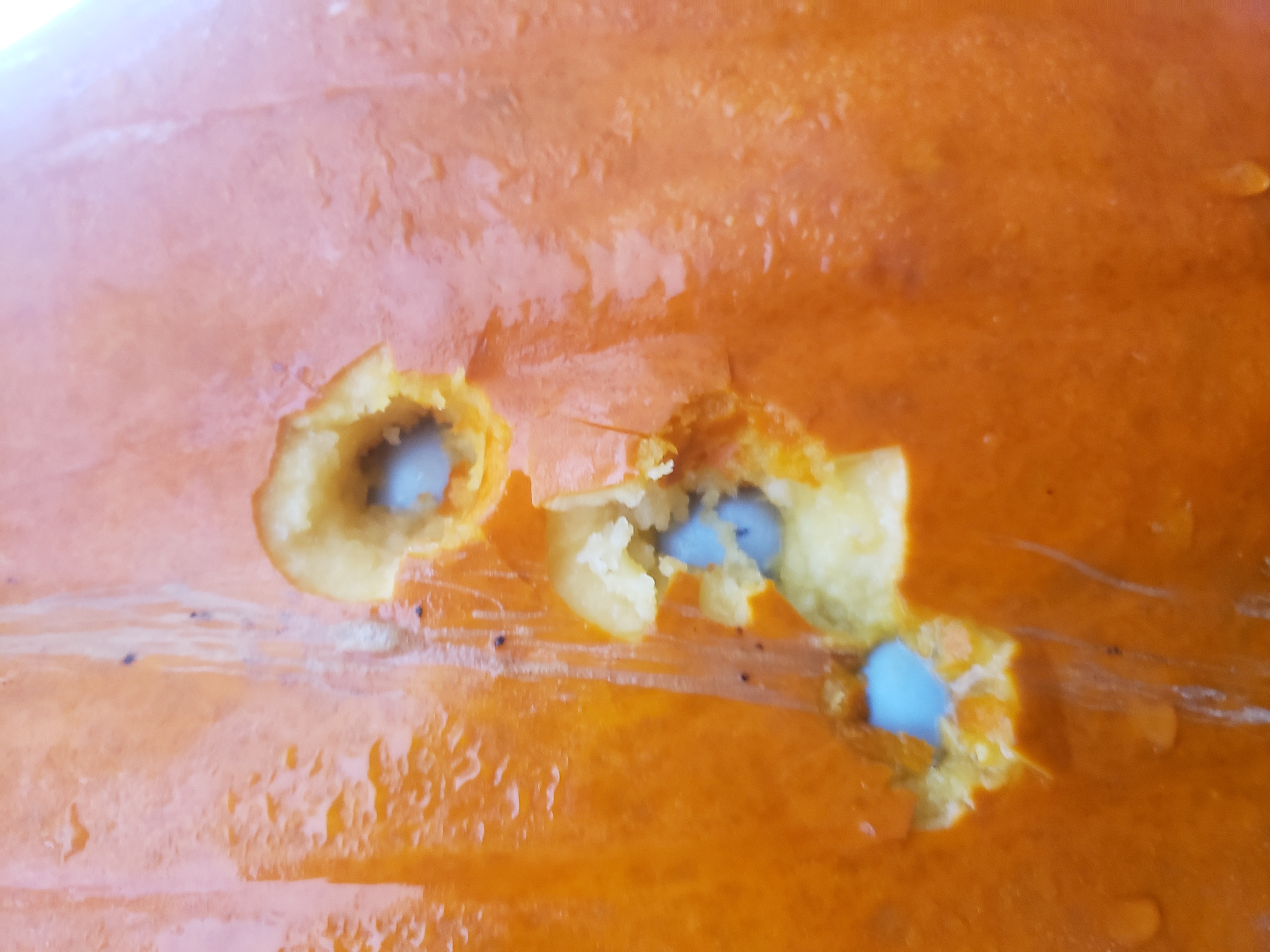 Each magazine holds five rounds, so I swapped a fresh mag and unloaded more pellets into the other side of the pumpkin. I then stopped as the dirty look from my neighbor seemed to intensify so I stopped before she went full Karen.

Byrna recommends swapping out the CO2 after 10 rounds because of the relative loss of pressure after 10 shots are fired. All I know is that I would not want to get hit with a round, let alone 10. 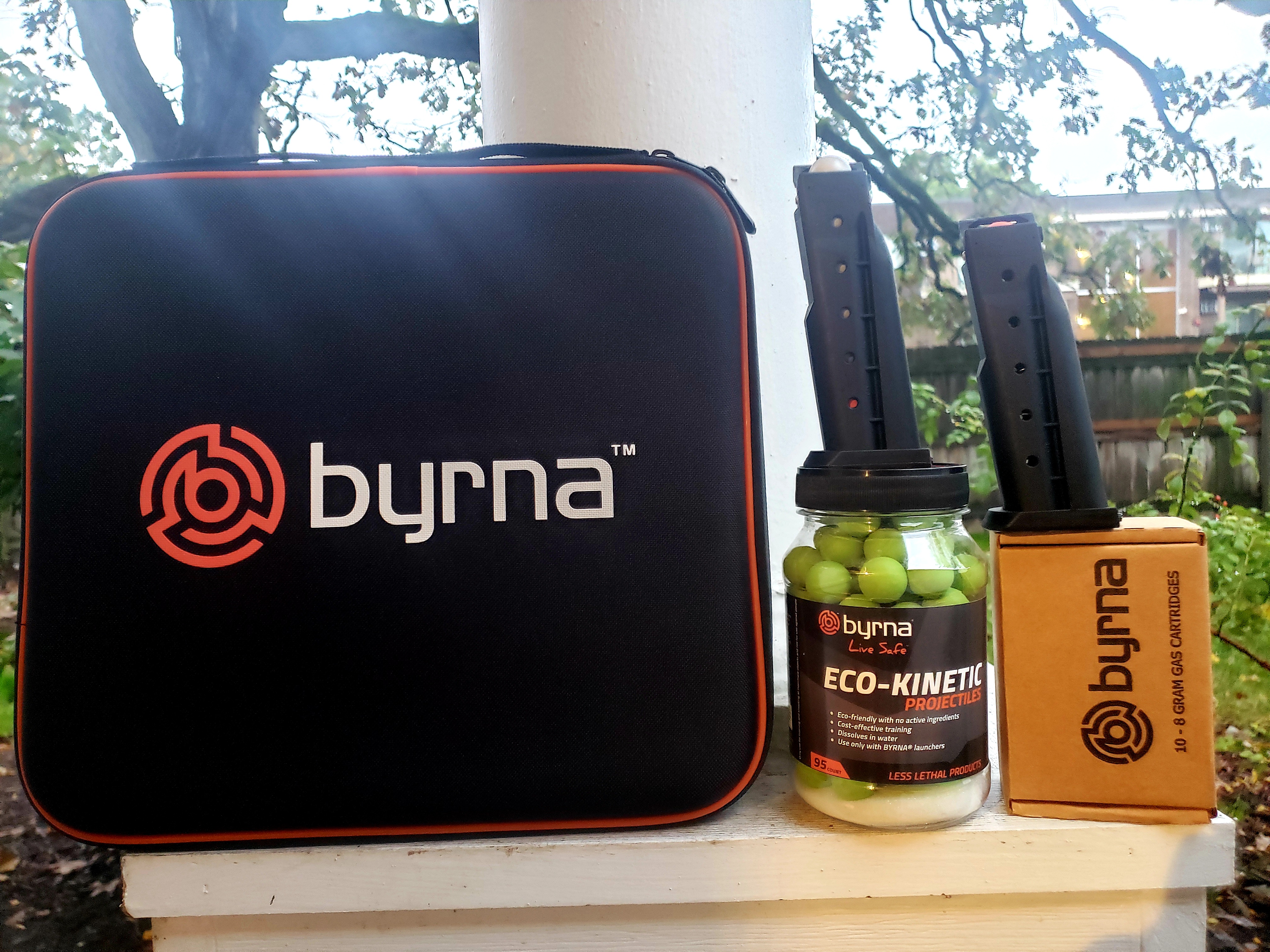 I like this thing a lot. It’s actually fun to shoot. I also think having a less than lethal force option is always a good idea. On top of that, the Byrna HD launcher is good for plinking. With ammo prices still pretty high, the cost of shooting with the HD launcher is a much more affordable option (not to mention you can do it in your yard).

Last, I checked and CO2 cartridges are pretty cheap and easy to find. The kinetic rounds are reusable, too, which is pretty awesome. 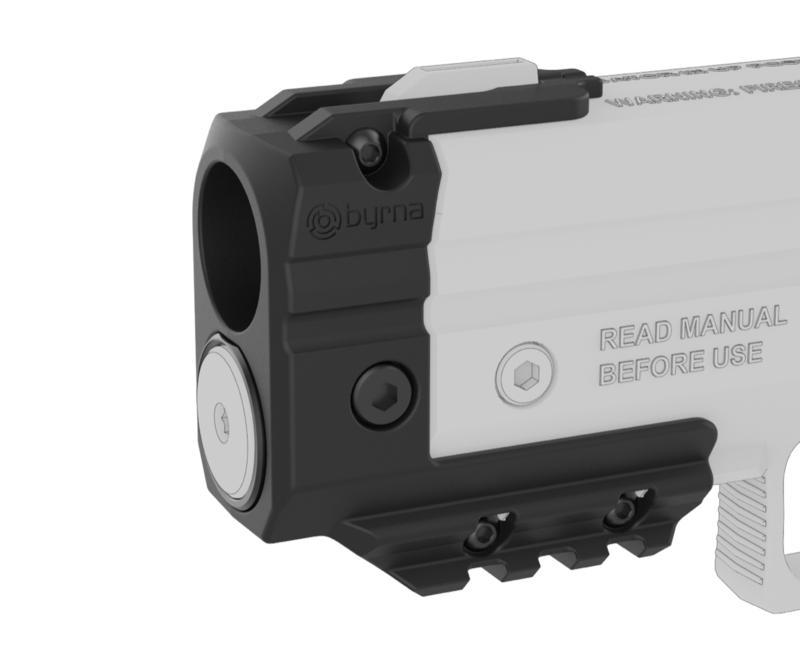 I am going to order the Byrna Boost Adaptor. The adaptor conveniently allows you to use standard and readily available 12-gram CO2 cartridges, delivering an increase in shot capacity to 20 rounds per cartridge. According to the website, performance will also increase 6 fps. It will also increase capacity, allowing you to shoot 50% more shots per CO2 canister. Another nice thing is that standard 12g CO2 cartridges are readily available everywhere.

I highly recommend checking out the Byrna for yourself at www.byrna.com.