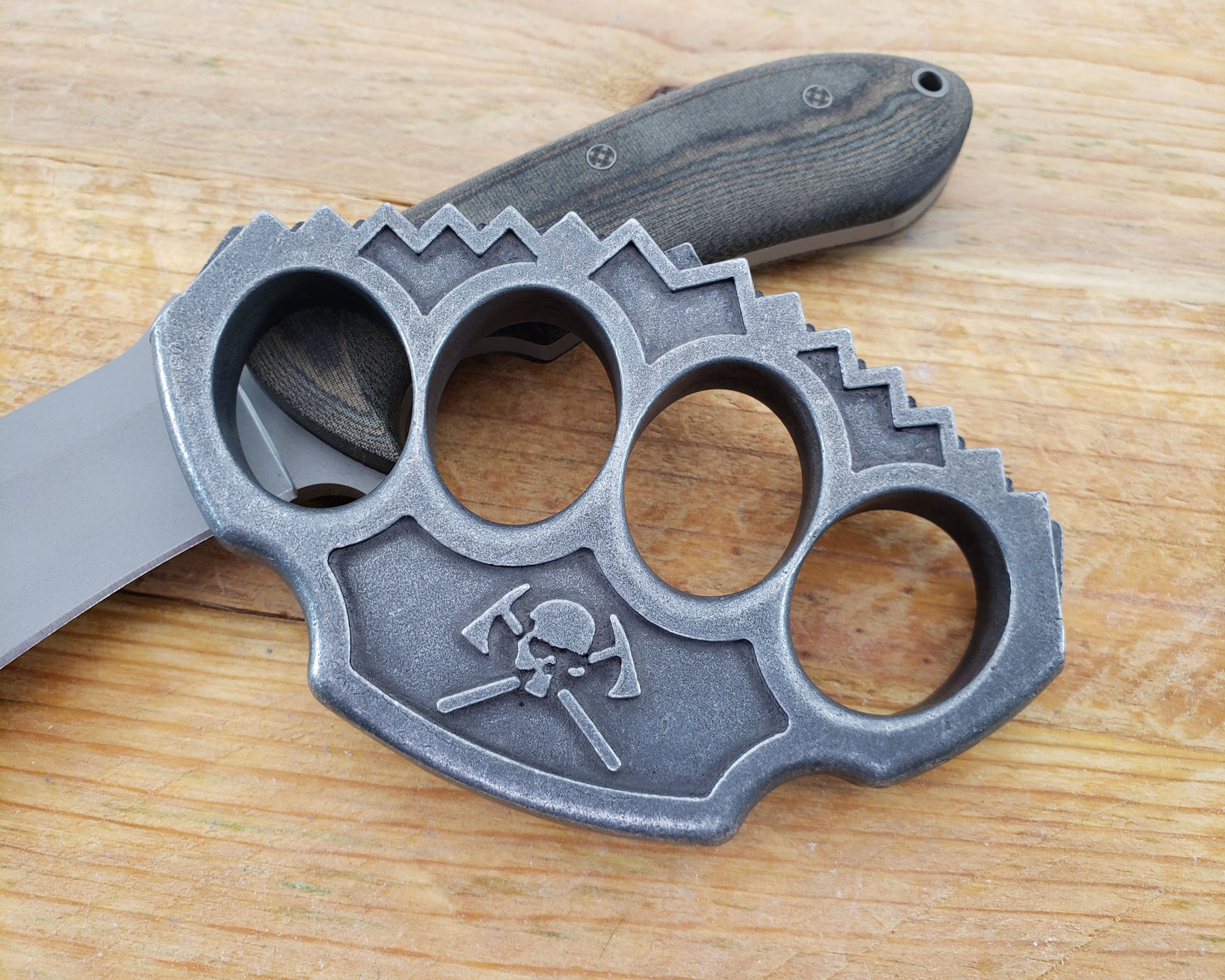 I’ve been on a brass knuckle kick lately. Well, they don’t actually have to be brass, but you get the idea. The Bawidamann two finger DB-2 Doughboy’s really got me enthused over the idea, and I’ve been looking for a set of full knucks ever since.

I’ve been stalking the RMJ USA Instagram account for a while now, and when I saw the Tetsubo’s they had at Blade Show I did a deeper dive and have been keeping close track of what they’re up to so I don’t miss the next time they drop.

A Tetsubo is basically a metal studded Japanese club. I absolutely need one, but when I came across the Snuckles, I realized I needed those, too. It just so happens that a batch of Snuckles dropped recently. RMJ gave a heads up because this stuff sells out fast.

I set my alarm to check around drop time and when I logged on they were listed as sold out. On the off chance they were running a little late though, I kept refreshing the page. Lo and behold on one of the refreshes the magical words “In Stock” appeared. I jumped and managed to snag one.

So what exactly is a Snuckles? RMJ’s Snuckles is a set of full-fist knucks made from brass, stainless steel, or aluminum. The batch that dropped was aluminum and you could either get them in black Cerakote or a forced patina over the raw aluminum. I grabbed a set of the forced patina ones. 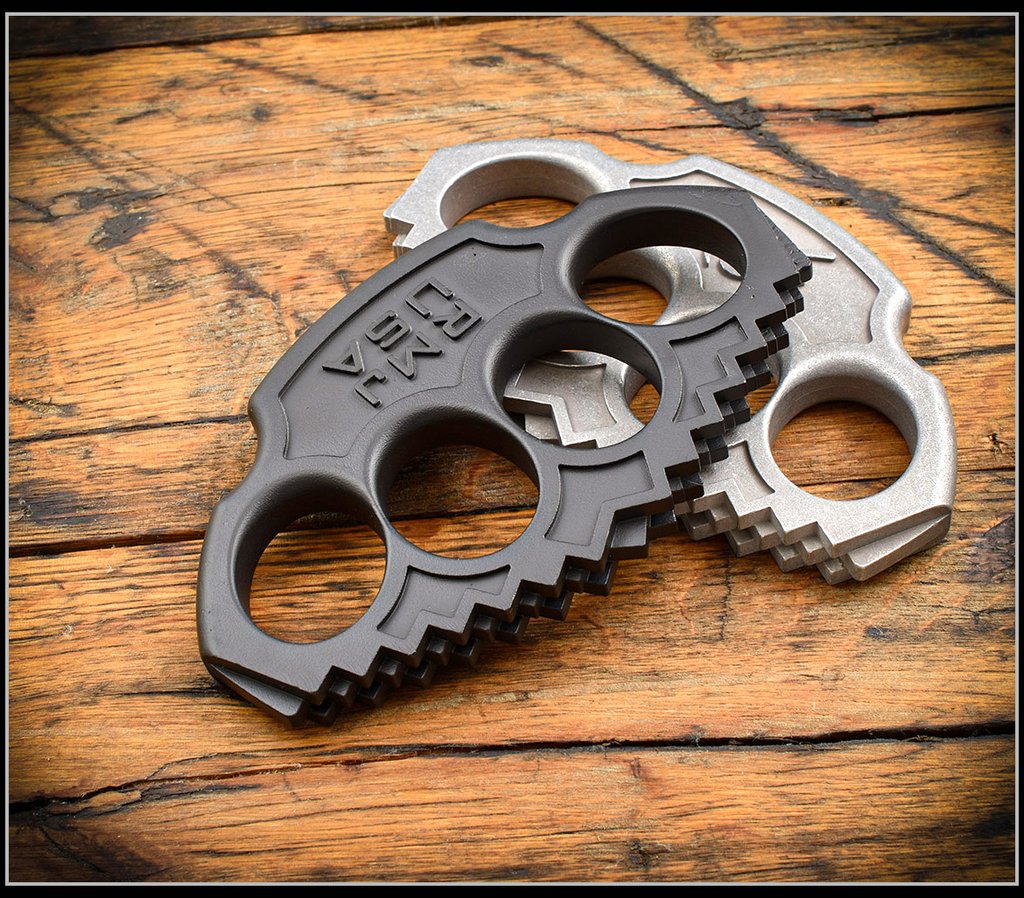 They’re scaled to fit a medium to large hand and have finger holes plenty big enough for most meaty paws. I have a busted up knuckles that doesn’t fit through a lot of older knucks, or the handle of an original MK I Trench knife. I had plenty of room in the Snuckles though. 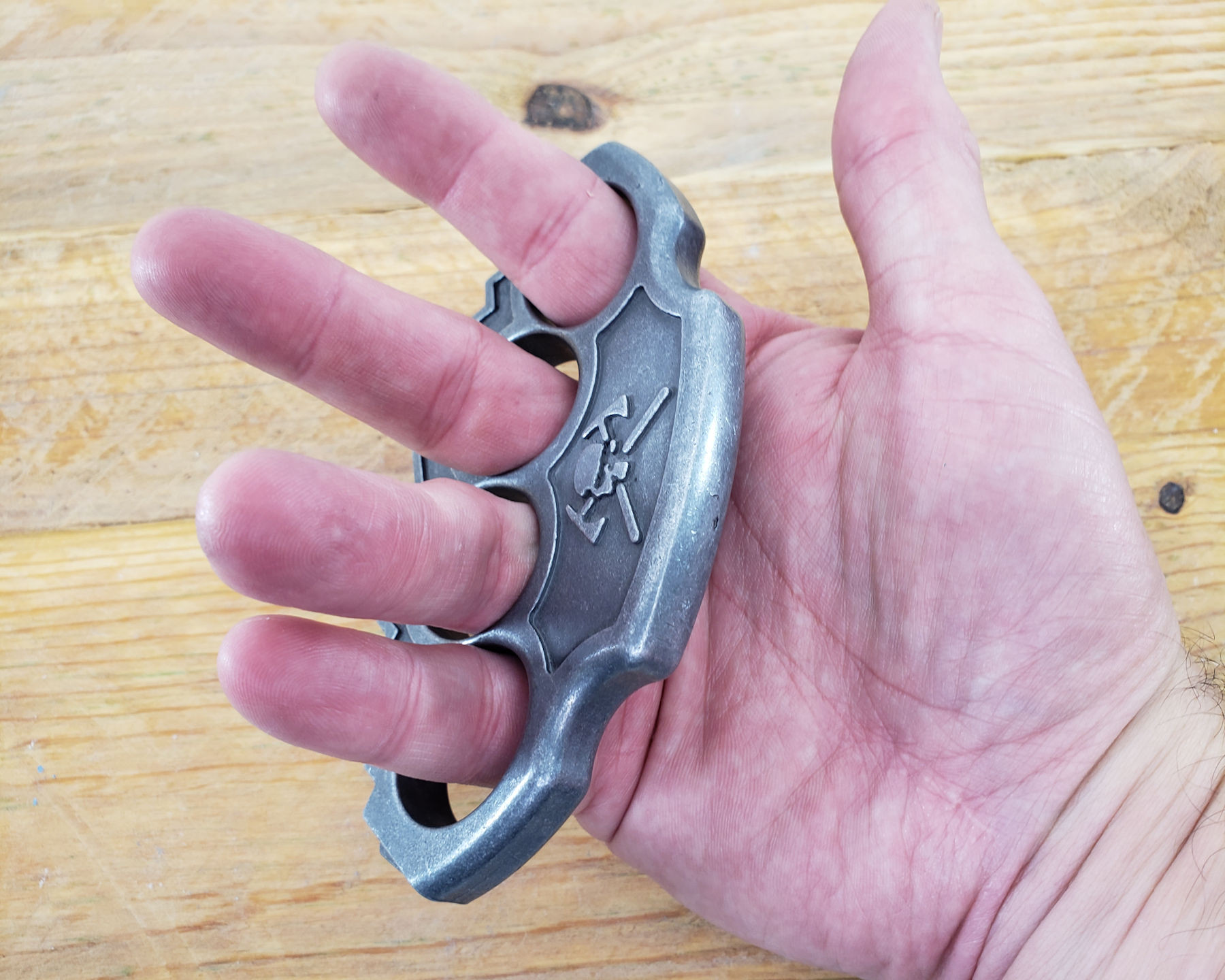 They’re made from one-piece of investment cast 6061 aluminum and are a half inch thick and a bit over five inches wide. Weight is only 4.5 ounces. So they’re light in the pocket but still should pack a wallop, especially with the aggressive meat tenderizer striking surface.

Speaking of meat tenderizer’s, that’s how RMJ markets them, as “a four-finger meat tenderizer, napkin holder, paperweight, forehead scratcher, extreme exfoliator, DNA sampler thing.” They acknowledge that they’re legal to carry in some states, and permitted in others with a concealed weapons permit, but be careful that you not to do anything dumb and know your local laws. My Snuckles are purely for kitchen use, of course. 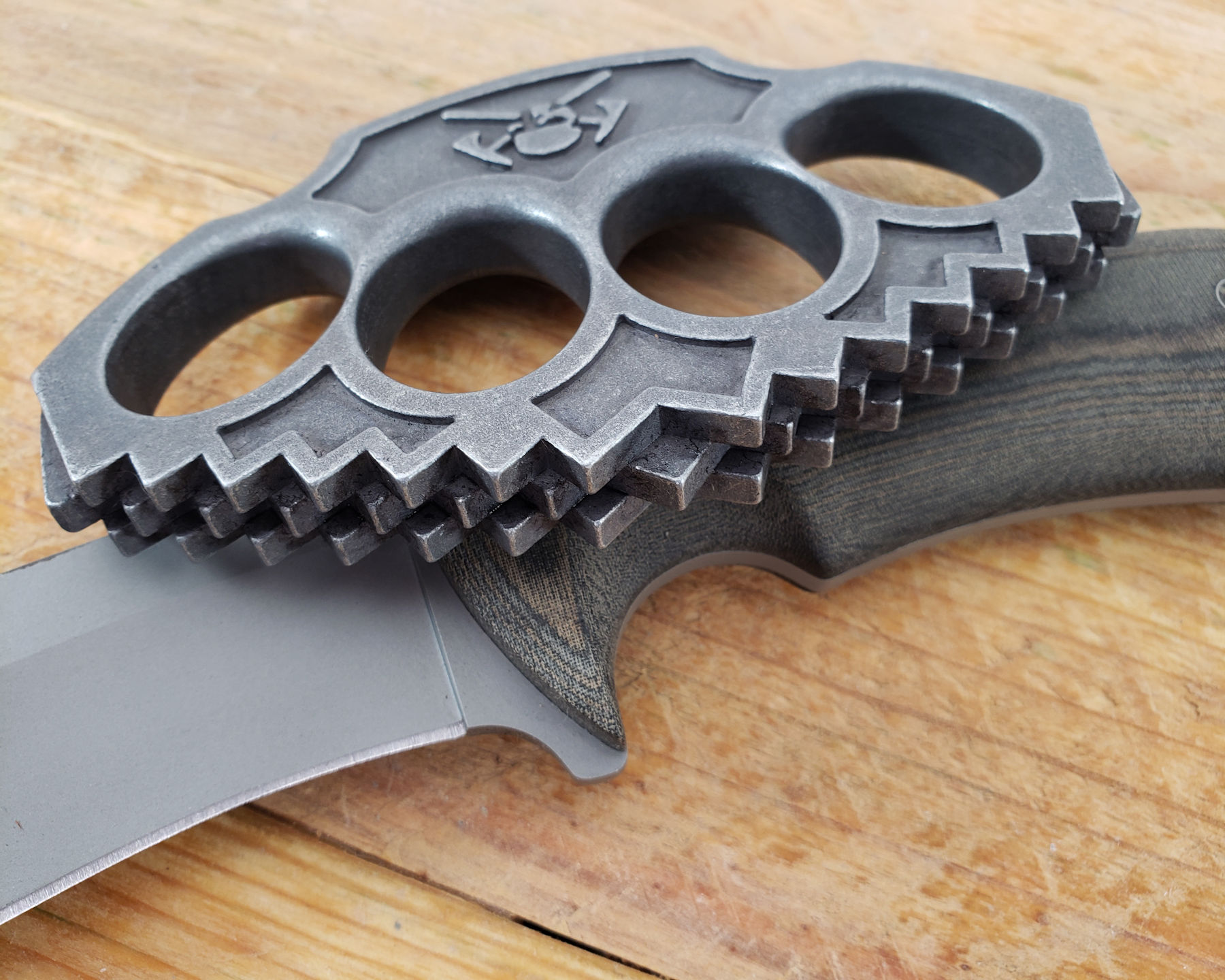 Snuckles are extremely well thought out and nicely made. All of the edges except for the striking surface are melted so that no sharp corners exist. They’re smooth and comfortable in the hand. When grasped, the handle offers plenty of offset so that fingers won’t be banging against the front of the finger holes when you’re tenderizing that side of beef you bought for the family picnic. 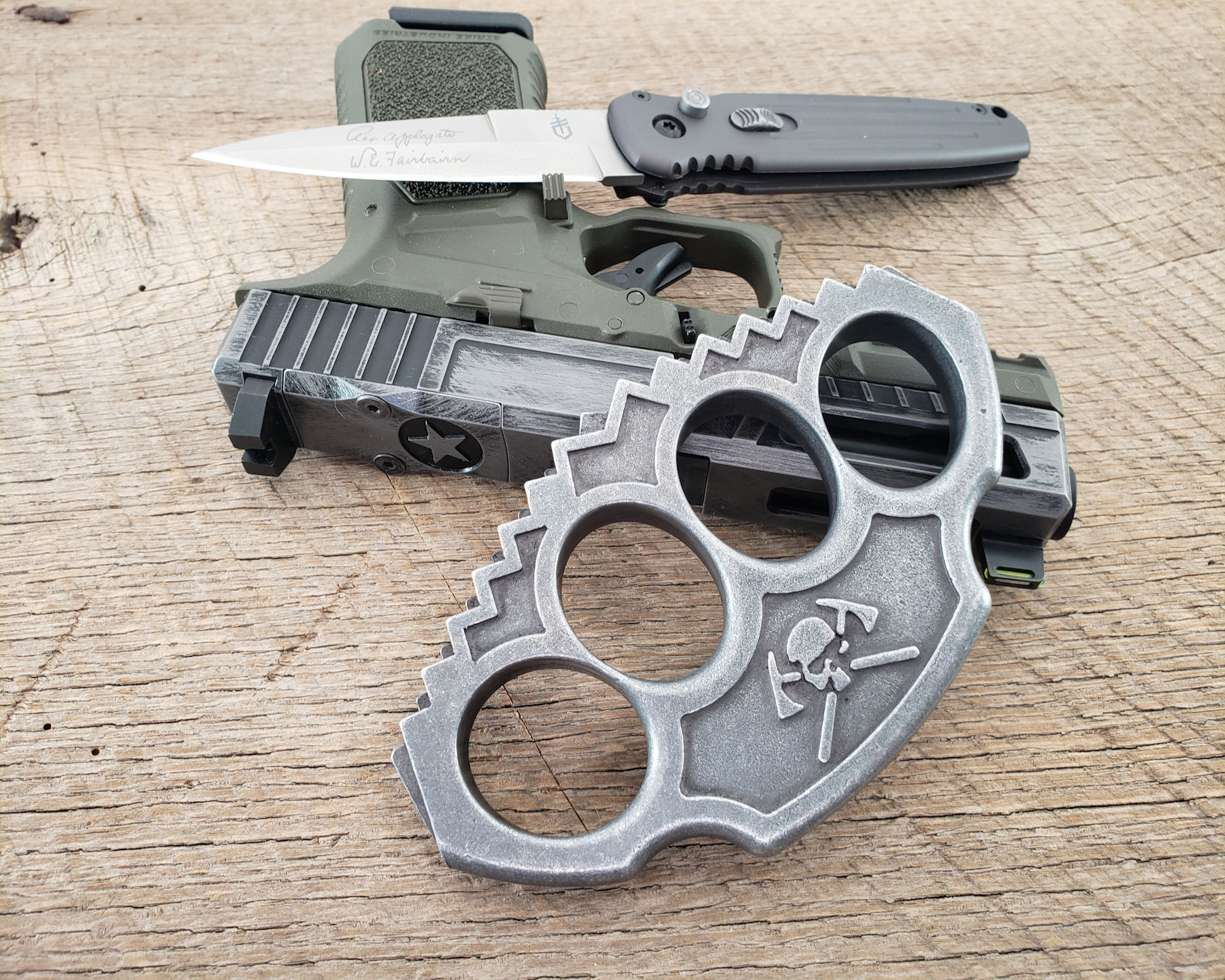 They have a sort of Steam Punk vibe to me with the mix of old school brass knuckles style with that aggressive meat tenderizer edge. It reminds me of the gears of a particularly nasty machine. On one side of the handle you have “RMJ USA” and on the other the skull and crossed tomahawk RMJ logo.

I really like the light weight feel of the aluminum model, but there is something to be said for the heft of brass or steel, and brass is classic. I’m quite happy with my current Snuckles, but I’ll be keeping an eye out for when the brass ones drop to grab another set. I do have two hands after all. 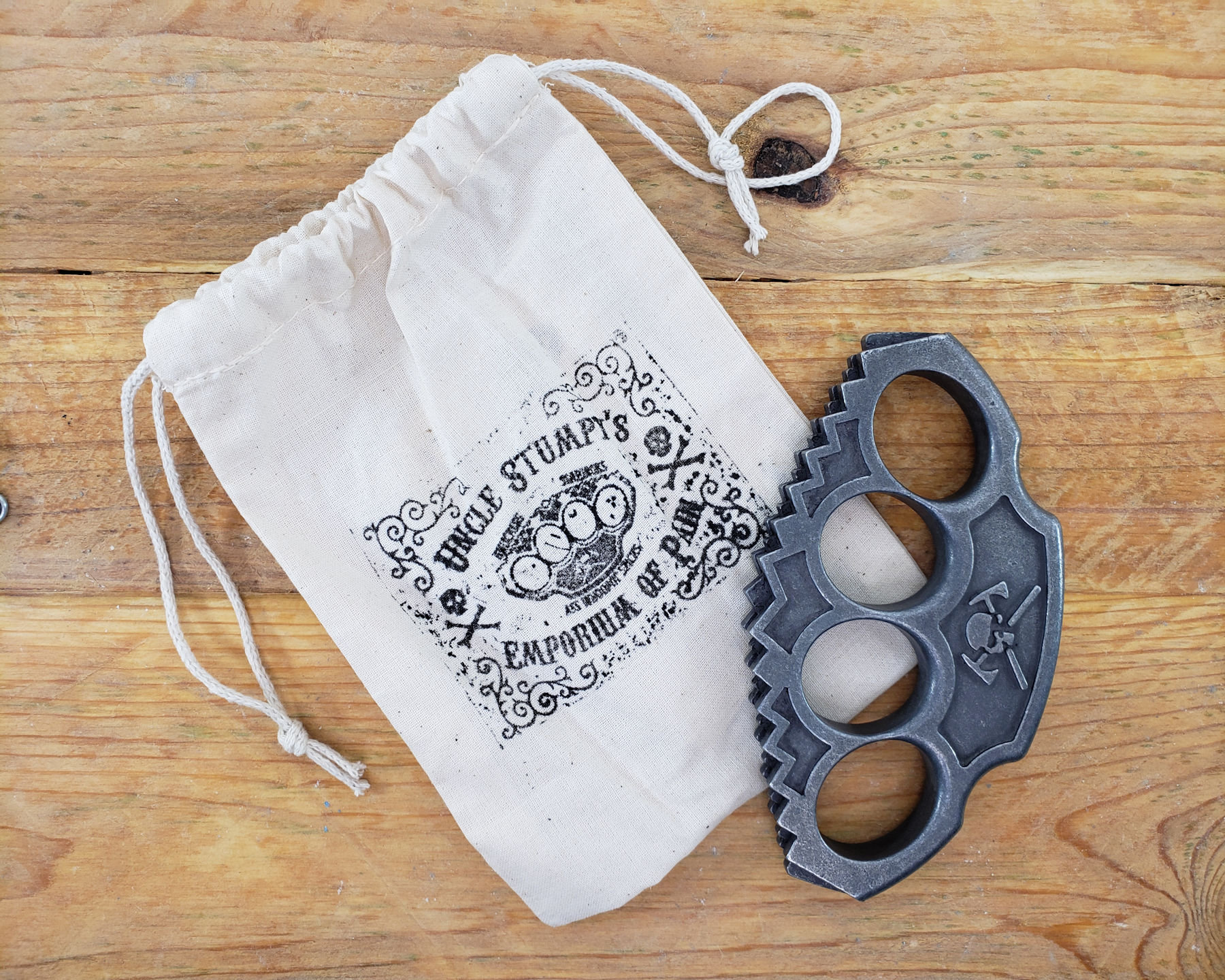